The results are in for the first-ever NPR Turning the Tables readers' poll, and per NPR, "they send a strong message to anyone fancying themselves a cultural justice warrior in 2018. It is this: check your intervention. The original list of 150 Greatest Albums Made By Women, assembled by a committee of nearly 50 NPR-affiliated women, sought to correct a historic bias against putting women's stories, and their artistry, at the center of popular music history."

Nearly 4,500 voters participated in this poll, stumping for a total of nearly 8,000 different albums. The voting patterns reflect a story of passionate advocacy for artists whose music changed their lives. At the top of the list are Carole King's 'Tapestry' and Joni Mitchell's 'Blue'.  NPR's Ann Powers says, "Following not far behind are many singer-songwriters of the 1990s, who learned the fundamentals of artistic independence, defiant virtuosity and daring intimacy while holding Joni's and Carole's album covers in their hands."

Carole said, "I’m honored to be on NPR’s list with so many great women.
Thank you so much for voting!"

One ruling principle in popular music is that fans matter.  Fans make history.

To read the article and see the list please visit NPR Turning the Tables. 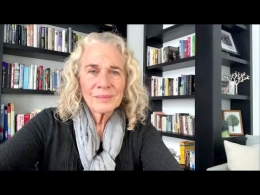