'Carole King: A New Colour in the Tapestry' Re-Airs on PBS

LOS ANGELES, CA - Back by popular demand, PBS is re-airing Carole King's 1994 concert special as a part of their national fundraising event in March.

"Carole King: A New Colour in the Tapestry" was taped at the Bushnell Theater in Hartford, Connecticut and offers a rare opportunity to see the legendary singer/songwriter in a concert setting, performing some of the most notable songs from her extraordinary career.

Featured in the program's pledge breaks were music videos from Carole's latest studio album, Love Makes the World (which was also being offered as a pledge premium). "Carole King: A New Colour in the Tapestry" aired nationally in March 2003. 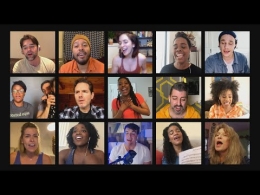