NEW YORK, NY - Carole King and James Taylor appeared on the Today Show and the Late Show with David Letterman, Wednesday, January 20th to promote their upcoming "Troubadour Reunion" world tour. The tour, which begins in March and launches in Australia, will make its way around the globe through New Zealand, Japan and North America.

The Today Show, co-anchored by Matt Lauer and Meredith Vieira, attracts thousand of visitors each year to peer into its windows and become part of the Today's broadcast from its facility at the corner of 49th Street and Rockefeller Plaza. It is also renowned for providing its audience with a window on the world by broadcasting from remote locations around the earth. The Today Show airs on NBC, Monday through Friday from 7am - 11am ET/PT. 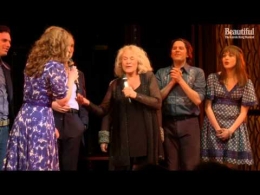 Happy Inauguration Day 🇺🇸 Art by @thisissketch https://t.co/fQWE4HZURi
January 20
"But I think I saw a brand new light Coming over the horizon Brighter than all the others And it says all men are b… https://t.co/NRvOddojgy
January 19